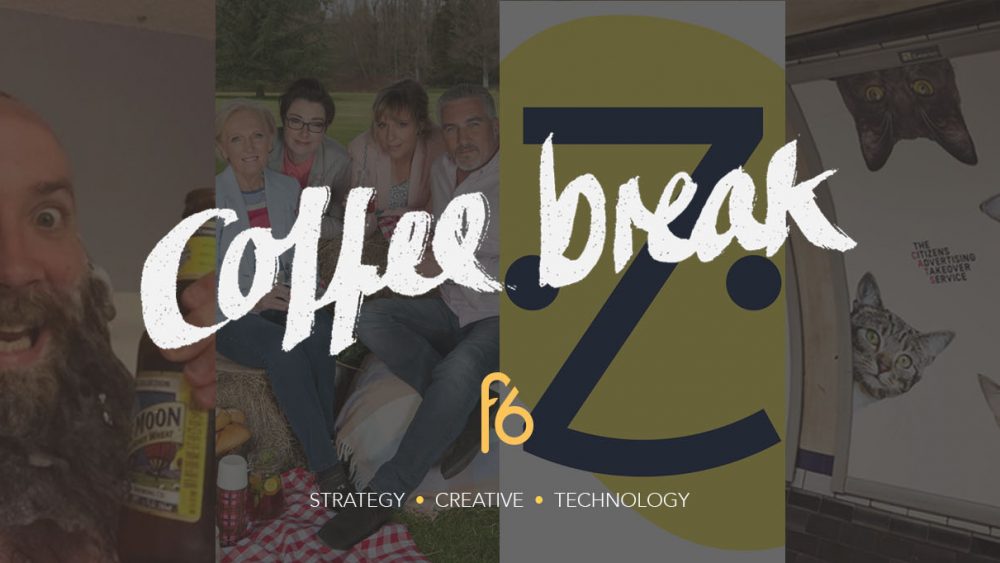 Get the F6 Friday feeling with shower beers, bake offs, lots of yellow, and a tonne of cats.

Yellow is the new black (& teal)

This summer The Wall Street Journal confirmed that yellow is the colour if you want to sell a book based on its cover. We’re now seeing more and more yellow books on the shelves, including covers that use an eye sweltering 100% yellow, which is pretty much as yellow as yellow can get.

This video speculates The Girl with the Dragon Tattoo (and thankfully not Minions 😖) kick-started this trend back in 2008. But why use yellow as a hero colour? For books it’s a great choice for two main reasons.

The first and most obvious is how loud yellow can shout. When done correctly, yellow can support both dark and light visuals, and online, where most pages are white, yellow jumps out even in the small space of a thumbnail.

Secondly, and most importantly, the colour can represent a whole spectrum of meanings – perfect for a whole spectrum of genres. As a versatile colour (or confused depending on which way you want to look at it), it can represent anything from optimism, joy, friendliness, optimism, and warmth, to danger, toxicity, arrogance, envy, and egotism. In Asian cultures yellow is the most significant colour, while throughout history there’s evidence of yellow consistently being used to represent ostracism.

So what about brands? Yellow’s versatility and strong associations lend itself well to visual communication. One of my favourite and most memorable re-brands from this year, ZocDoc dropped their corporate teal for a bright colour palette that used yellow as a hero colour. Wolff Olins, an ambassador for yellow branding themselves, went against the traditional healthcare greens and blues, and chose yellow to represent optimism and warmth.

On your marks, get set… BAAAAAKE!

The Great British Bake Off commanded the largest TV audience of the year last year. The hit TV show announced this week that it will move from its BBC home to Channel 4 next year due to BBC not offering to spend more to keep the programme.

The number of viewers watching The Great British Bake Off went up by more than half a million on Wednesday compared with the previous week. Whether you watch the show to learn how to pipe vanilla buttercream, see the showstoppers, or to hear the great phrases like; soggy bottoms, lovely sausage, layers, all of this has us tuned in to enjoy the show for its gentleness and quaintness.

The programme’s future was thrown into turmoil after hosts Sue Perkins and Mel Giedroyc announced that they will not return after the move to Channel 4. Will this mean the baking stars Mary Berry and Paul Hollywood will not return either?

What does this mean for #GBBO’s future? Will the show be reduced to 42 minutes with 18 minutes of adverts (as it currently has no adverts), or could the show be extended to one hour and 20 minutes to make room for advertising (which seems excessive right)?

This could be a risky move for the BBC as it has compromised millions of viewers over revenue. There is so many opportunities to make revenue, like product placement, to include products or brands in the programme, which will allow the viewers to still enjoy the same format, with it’s favourite presenters, which will in the end be the key ingredient in its future success….

Bigger question is, who is your money on to win this year? Mine is on Candice 😉

A few months ago a crowdfunding campaign got the internet curious: give money to replace tube ads with cats. And people did. Clapham Common tube station saw its billboards filled with 68 cat pictures this week. £23,000 was put into this.

The reason why? According to the Citizens Advertising Takeover Service (CATS), ‘it’s exhausting being asked to buy stuff all the time’.

I do a two hour commute every day. That’s 20 hours on the train from station to station every week. The billboards? Most of the time I don’t even notice them. Except for the Jack Daniel’s ones I look forward to every day and the ‘Shot on iPhone’ that make me wonder why my iPhone pictures don’t look as nice as the ones on the adverts.

A CATS representative said ‘Wouldn’t it be great not to worry about the holiday we can’t afford, the car we don’t need, or the body we don’t have?’ Do you really? Am I the odd one out? Working in the industry I probably pay more attention to advertising than other commuters but, is it really in your way? I’m pro-ad blocking on the web, where ads pop-up and interrupt your search, but on the tube? I’m actually grateful to have something to read when my Medium bookmarks haven’t synchronised and I’m left to wonder and avoid eye contact with other fellow travellers.

I think the whole ‘Ads tell you what to do, we don’t have a brain’ argument is old and tired. Who sees an ad and goes straight to the shop? Nowadays with the internet we are in an era where we make the most educated purchases of all time. And cats? 🙄

I come from a country where salaries don’t pay the bills any more and soup kitchens are getting refurbished so kids think their parents are taking them to a restaurant for dinner, and someone just spent £23,000 putting cats on billboards.

Beer at bathtime: brilliant or barbaric?

We’re a fickle bunch, mankind – hopping from one trend to the other faster than you can say ‘PokemonGo’. And over the years, we’ve seen some truly weird shenanigans – from planking, to post-it wars, to the colossal internet-wide dance-off caused by the Harlem Shake. Every now and again though, one fad is so glorious (or bizarre) that it ends up clinging to fame for far longer than anybody expects – and that’s exactly what happened with last year’s ‘shower beer’ craze.

Apparently, whether it’s the way you start your day or how you cool down after an evening jog, enjoying a cold beer as you get cleaned up is one of the most invigorating experiences out there. It quickly turned into the pastime of connoisseurs, as there is now a whole subreddit devoted to the art. If you can get past the risk you run of soaking your phone, joining the hype is as easy as taking a sudsy selfie while holding your brew of choice! Just try to make sure it’s a headshot.

The appeal of the act comes from a technique that’s used in both written and visual art called ‘defamiliarization’. This refers to the idea of taking something ordinary and placing it in a situation or environment completely separate from its generally accepted context, allowing us to view said object from a fresh perspective. It’s an effective technique, as it highlights aspects of said object that we may take for granted, due to how frequently we’re exposed to it. When confronted with the concept of a shower beer, we’re forced to compare our expectations of what a shower feels like with our assumptions of experiencing a cold beer; the result is unprecedented levels of cathartic refreshment!

I’m shocked that no brewery has capitalized on this. In my opinion, there’s some untapped potential here – what better way to market your beer than to display a customer enjoying it in their birthday suit? It’s attention-grabbing, it promotes good hygiene, and while some might say that the combination of nudity and alcohol is a little risque, I say they haven’t tried it yet 🍻

More power to the shower beer, I say!