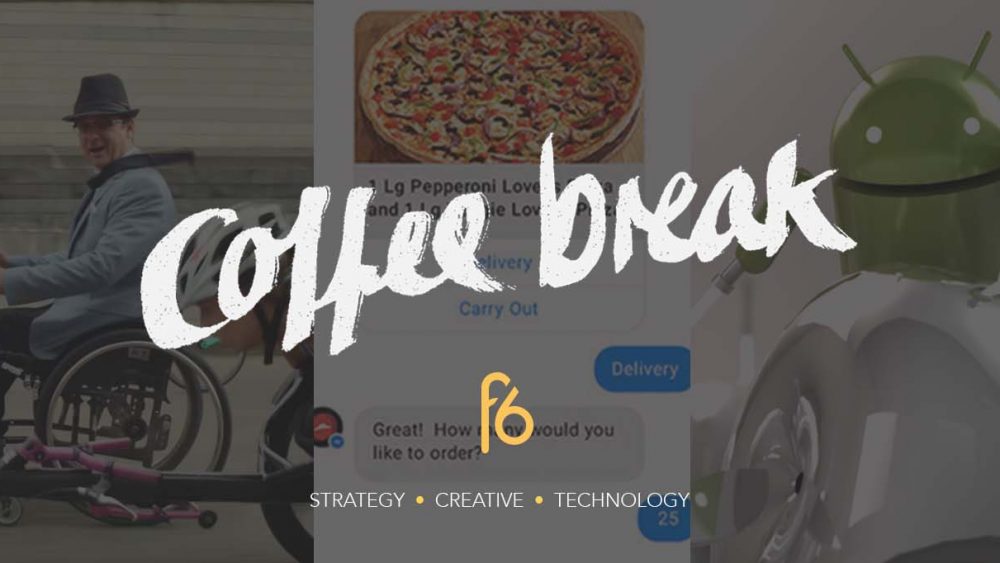 Here’s our round-up of what we’ve been talking about this week including Apple and Samsung’s battle, bots vs. apps, and winning Olympic ads.

For over five years we’ve sat on the sidelines watching as two tech giants take each other on in a confusing game of patent infringement tennis. Millions of dollars later, Apple and Samsung are still locked in a battle where when one side serves up an accusation of copycat design, the other hits a return of tech theft. This week has seen the submittal of an Amicus brief in Samsung’s appeal to against violating Apple’s patents. The brief, in support of Apple, acts as a design primer for the court, and has caused waves after being signed by the likes of Paula Scher, Alexander Wang, and Dieter Rams. Many of the signatories have worked for IBM, Xerox, and Nike, lectured at Harvard, MIT, and Stanford, or consulted for both Samsung and Apple.

What’s most interesting is the underlying argument of the brief. It argues that cognitive science proves we make associations between visual attributes and our experience of an object’s functionality. Using Coca-Cola as an example of this process, it argues Coke’s patented glass bottle is recognised by 99% of Americans, with many arguing it tastes better from it.

Visual design therefore becomes tethered to features, functions, and our overall understanding of a product, and in a market where technological function is becoming uniform across products, design differentiation is imperative. General Motors was able to surpass Ford for sales when it realised that although the same functionality exists under the bonnet, they could change the colour of that bonnet to help drive sales. In fact the brief argues that design is now one of the most important decisions in purchasing a car today.

Patents are therefore there to protect not only visual design, but the associations those visuals have with functionality and experience.

On the flipside, Samsung has the backing of Facebook and Google, claiming innovation will become stagnant in a world where we’re unable to borrow or build upon existing ideas because of the limitations of patents.

Whether you’re backing the tech community or the design community, this game of legal tennis is throwing up some interesting debates around the value of design and how we protect or build upon ideas.

Apps vs. bots, may the best tech win!

A couple of months ago, Mark Zuckerberg revealed a new platform for developers called ‘Bots for Messenger’, which allows companies to create AI bots to help consumers get product suggestions and make orders through Facebook’s messaging app Messenger. On his keynote, Zuckerberg stated that no one likes to pick up the phone to make an order, and he shared his vision of Messenger bots replacing apps. Why have a hundred apps on your phone when you can have Messenger and talk to AI assistants? It makes sense when you think about it that way.

Since the announcement, more than 11,000 bots have been created. Domino’s, who earlier this year allowed customers to order pizza by tweeting emoji’s, has just announced it’s now possible to order pizza on Messenger. Their rival Pizza Hut is also trialing this method. Although there’s a lot of excitement (and skepticism) around this initiative, it will take a while to see if  Zuckerberg’s vision will become a reality.

If you’re wondering how this will work you can watch the demo video below of how a bot will help you pick your Burger King meal and make an order:

What makes a Olympics successful advert?

Right now, the Olympics are in full swing. It is a huge opportunity for brands to advertise and connect with their audience. In any advert, the time-frame you have to make an impression is limited to seconds. Will it be memorable? Does the advert encourage the viewer to take action? Does it evoke emotion? Or will it focus on reinforcing brand personality?

For adverts to be successful, they need to strike the right emotional chord with its target audience. Here are some of the top Olympics ads for 2016:

Channel 4 shows the Paralympics is about more than the sport

Minute Maid #doingood I See What U.S. Olympian Missy Franklin Has To Say